After 15 years growing a church to thousands of members worshipping in local school gymnasiums, newlife.tv hired Rice Fergus Miller to bring them their first “own” building: a conversion of the former Regal Cinemas to become their training center and Central Kitsap Gathering space — “people becoming the church.”  This adaptive reuse project was designed and delivered to reflect their closely held value of “scrappiness” – where churches are about People, not about Buildings. Rice Fergus Miller’s idea was to organize the layout of the new space to connect to the adjacent Silverdale Community Campus and Haselwood YMCA, thereby extending the campus’s reach and bringing much-needed meeting space to the Silverdale area.  Newlife’s gathering space seats 650 people and, when opened to the commons, expand to include 800 worshippers.  Flexibility was a priority in this project, designed to accommodate multiple uses in a majority of the completely reorganized and reshaped new spaces. 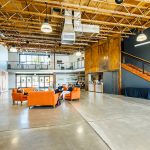 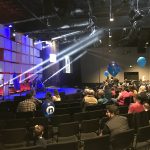 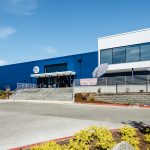