Located in downtown Bremerton, this 1970s building was originally home to Seattle-First National bank and later to Bank of America. Now, as a new era of banking emerges focused less on physical space and more on user experience, the design team was tasked with reimagining a new consolidated branch location for Kitsap Bank. Sharing the building with neighbors Starbucks as well as several other tenants, the 4,600 square foot branch consists of a teller line and personal banking services, staff support spaces, a shared building lobby, and a community meeting room situated in the original vault.

Kitsap Bank’s vision for the vault room was to provide a gathering space, not only for its own employees but for the entire community. The design team took advantage of the unique history and construction of the room, leaving certain elements in place in order to tell a story. Portions of the 18-inch-thick concrete walls and ceiling were intentionally left exposed. On the ceiling, the words “Cause Good” serve as a constant reminder of the bank’s mission to support positive change in the community. Perhaps the most prominent feature of the room is a wall of red safety deposit boxes which were left in the room by the former tenant. Over 1,600 of these boxes were used to create a dimensional installation which pays homage to the history of banking. 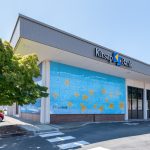 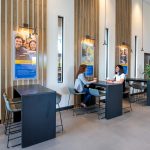 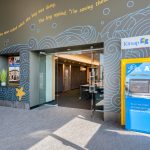 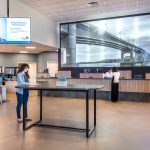 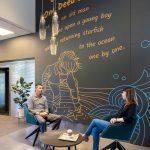 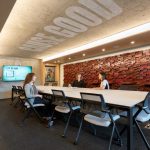 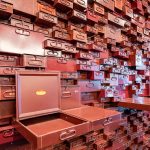