SILVERDALE — Kitsap Regional Library now has renderings of what its new location, co-located on the Central Kitsap School District campus near Anderson Hill and Bucklin Hill roads, will look like.

Right now the designs are being finalized and those working on the project will apply for building permits by the end of December, said Doug Newell, CKSD assistant superintendent for finance and support. They hope to have permits by March, go out to bid in April, and hopefully start construction in May 2020, he said. Plans call to open the new library in spring 2021.

It will share a space with Central Kitsap Middle School and Central Kitsap High School, providing community access to a 900-seat auditorium, outdoor space, a trail, sports fields and tennis courts. The library and the school district are splitting the cost to renovate a wing of the old high school into a library that can be used by the schools and the community.

Although the new Central Kitsap middle and high schools have their own libraries, this will serve students after hours. It will also serve the Silverdale and greater Kitsap communities. Ashley Oaksmith, branch manager for the Silverdale library, calls it a unique opportunity to serve residents from all parts of the county in a central location near many businesses and places of work. She said library officials are also excited to be close to 2,000 students who can use the library.

“Right now we have an average of 10,000 visitors per month to our little Silverdale library, and we’re expecting that to grow,” Oaksmith said. “Silverdale has needed a larger library for some time, 30 years or so. It’s exciting to tell people it will finally happen in 2021.”

The two-story, 42,000-square-foot building the Silverdale library will move to is referred to as Building 900. It was built in the 1970s and held the high school’s cafeteria and common area until this fall when students moved into the new Central Kitsap High. With the new plan, the school district will use the second floor for offices while the first floor is to be a public library open to all. The school district owns the building, and Kitsap Regional Library will be its tenant.

“I don’t think anybody’s going to recognize the building when we get done,” Newell said. “This building is beautiful behind its skin so we’re going to give it a good bath. It’s going to be an open, light-filled space.”

The library is planned to be more than twice as large as the current Silverdale library and will have at least four times as much parking during weekdays, or eight times as much during weekends. It will have a teen space, more study rooms and meeting rooms for community use. Oaksmith said she hopes it will be a welcoming space where people can enjoy views of Silverdale and Dyes Inlet.

Newell says sharing space will increase the utility of the building, and it’s a great opportunity to extend the use of the Central Kitsap campus. Both the library and the school district needed meeting rooms, and with most school business happening from 7:30 a.m. to 4 p.m., the library has the evenings and weekends to hold programs or meetings.

Working together has been easy, said Newell, because the library and school district share similar goals and the purpose of education and providing services to the community. 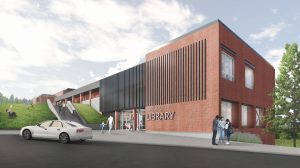 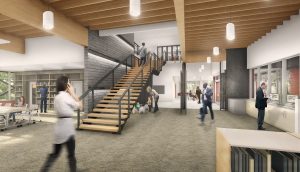 Boeing building to be studied for possible museum location
Offering something new: charter school coming to Manette in 2020