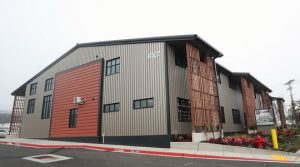 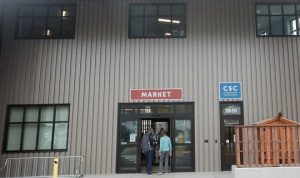 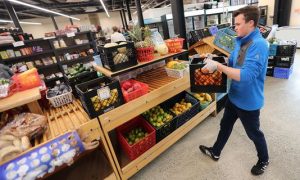 POULSBO – Some are still learning the office access code. Volunteers are still figuring out where to put the food and how to get in the building. The dental chairs still are being assembled upstairs. Clients are getting used to the new market.

But this place is here and it’s finally open, after years of planning and fundraising.

The first floor contains an expanded market and plenty of storage space for the donations Fishline receives. Upstairs are offices and meeting space for a long list of social services groups and agencies.

The whole building is a one-stop shop for North Kitsap residents in need.

“We don’t have to be limited by the space that we’re in,” said Fishline Executive Director Mary Nader. “And that unfolds opportunities. Now you can explore things that you may not have been able to explore. Now you can talk about bringing more providers and services on-site that we could have never thought about and introduce new programs and services within the Fishline world.”

Fishline raised about $4 million to build the new facility, which is about triple the size of its old location across the parking lot, and didn’t take on any debt in doing so, Fishline board president Tom Eckmann said.

When a client comes in, a Fishline representative has an initial meeting and points them in the right direction for services and a case manager takes on a long-term relationship with them, guiding them through the web of social services they might need help navigating.

Instead of sending North Kitsap clients to Bremerton or other parts of the county, Fishline will be able to send them down the hall.

“When you’re going through a difficult time, the hardest thing to do is to tell your story to somebody, to sit down and share with them the struggles that you’re going through,” Nader said. “It can sometimes be embarrassing. It can be difficult. But by creating this model, what we are hoping to accomplish is that these folks tell their story once. They come to one place and sit down with folks and share that difficult experience and then we take it from there.”

There’s plenty of support space for Fishline’s own employees and volunteers, as well as office and meeting space for those services agencies. Peninsula Community Health soon will open a seven-chair dental clinic on the second floor of the building. Once Fishline and those groups settle into the building, they’ll look for others to offer space, Eckmann said.

PCHS pays $1 a month for its clinic, but the rest of the agencies don’t pay rent for the spaces they use, Eckmann said. Instead, the groups share in paying the building’s operating costs.

On the first floor, Fishline’s food bank continues operating as it always has, but now with about 30 percent more space, Nader said. Donations from stores like Central Market, Albertsons and Safeway come through a back door, are sorted onto shelves and eventually placed out in the market. Perishable items can now go into a large walk-in cooler that will allow Fishline to preserve more food items, Nader said.

“On Friday afternoons when we have things we haven’t distributed but are still going to be good, we roll them into a cooler and pull them on a Monday morning,” she said. “That’s about a quarter of a million dollars-worth of food every year that we can now hold onto instead of throw away. That’s a big thing.”

Once Fishline gets settled into the new building, its leaders will consider how to make use of the old building, with possibilities like added meeting space, more offices for service providers, a commercial kitchen and an “urban oasis” for homeless individuals that could offer showers, laundry facilities and lockers, Eckmann said.

With the new building and more services accessible to the north end of the county, Eckmann said he expects the building to start serving a greater volume of clients.

“The building initially was driven by Fishline and help for our clients, but the agencies that are coming in here, they also have, independent of Fishline, their own client base they’ve been underserving by having offices in the south end,” he said. “The clients coming in here won’t necessarily be Fishline clients; it will be a much broader group.”