SEQUIM — Some 200 advocates of the Jamestown S’Klallam Tribe’s proposed medicine-assisted treatment clinic were presented with the initial designs for it while dozens of protesters objected a few hundred yards away.

The invitation-only gathering on Thursday evening was conducted in the tribe’s Jamestown Family Health Clinic on North Fifth Avenue.

“We are aware there are people who oppose this (facility), but we firmly believe this project works,” Allen said. “The MAT is about healing, about getting people healthy again.”

Brent Simcosky, the Jamestown S’Klallam Tribe’s health services director, said the tribe plans to file its application with the City of Sequim in the next month.

Simcosky and Bud Turner, manager of the Jamestown S’Klallam carving shed, provided background on the main themes of the proposed clinic’s design, as well as architectural plans for the building that is to house offices and space for primary care, dental care, child care, counseling and the drug treatment itself, along with offices for staff and administration.

The building is expected to be 17,000 square feet, they said. In the past, it has been specified that the building would be approximately 15,000 square feet. The reason for the change was not obtainable by Saturday.

A consistent theme in the design, they pointed out, is rock and river. Jamestown S’Klallam Tribe storyteller Elaine Grinnell told of a grandfather teaching his grandson life lessons on a fishing excursion. A rock placed in a river, he told the younger one, has the ability to change a river’s course.

In the same way, those seeking treatment for their addictions can change their life’s course, she said.

“I didn’t realize there are so many people who care about a wonderful thing that’s going to happen in our community,” Grinnell told the audience.

“You are about your community and keeping it safe. These people are going to benefit from what you are doing.”

Suzanne Pontecorvo, a designer with the Kitsap-County based Rice Fergus Miller architecture firm, said the MAT clinic design is intended to give “the feeling that we’re all coming together.”

Pontecorvo added: “There’s not going to be healing without connection. We hope you’ll be able to feel that when you’re there.”

Tribal officials say the MAT facility will be unlike any other on the North Olympic Peninsula, where almost all medication-assisted treatment is offered by primary care providers.

In May 2018, the tribe purchased 20 acres of land zoned for health care on South Ninth Avenue, adjacent to U.S. Highway 101, where it plans to build a facility that that could be expanded later to about 25,000 square feet and eventually treat about 250 patients.

The clinic, broadly named by the tribe as a Healing Campus, includes a two-phase MAT facility and an inpatient psychiatric evaluation and treatment facility. Clinic staff would dispense daily doses of methadone, Suboxone and Vivitrol for opioid-use disorder and receive wrap-around services such as primary care, dental care and counseling.

For phase one, the tribe received $7.2 million form the state’s capital budget. The tribe will seek more funding in the upcoming legislative session.

Simcosky has previously said the tribe will use about $3 million of its own funds for phase one as well.

“A person does not choose addiction (but) a person can choose recovery,” Simcosky said Thursday.

The clinic proposal has drawn the ire of many Sequim residents. Members of the Save Our Sequim group have addressed a number of concerns at several Sequim City Council meetings and public forums earlier this year.

Simcosky said Thursday that he and other tribe officials have addressed those concerns a number of times — for instance, contradicting rumors that people would be bused to the MAT facility from cities like Seattle and Tacoma, “I repeated that so many times I wish I could clone myself,” he said — and noted that the tribe’s MAT application will include a Community Response Plan to address community concerns such as safety.

“Even with all the distractions, we are right where we want to be,” Simcosky said. “I’m ready to celebrate.”

Stephens said the didgʷálič facility and the Johns Hopkins Broadway Center for Addiction in Baltimore, Maryland, are the only kinds of MAT centers offering such comprehensive opioid treatment care in the nation.

He told the crowd Thursday that the Swinomish tribe had never offered services to non-tribal residents prior to didgʷáličs opening. Tribe officials there came to the conclusion that expanding its clientele would be beneficial for the tribe in the long run, Stephens said.

“The statement was, ‘We need to do it because we can,’” he said. “We faced an epidemic — the opioid crisis is an epidemic.”

Stephens said he expects that if the Sequim MAT facility is built and those who oppose the facility examine it a year after it opens, they will thank the tribe.

Allen also gave kudos to local leaders such as state Rep. Steve Tharinger, D-Port Townsend, and Clallam County Commissioner Mark Ozias, both of whom were in attendance.

“To me partnerships is how you get things done,” Lewis said at Thursday’s event, noting a community health needs assessment identified its top two priorities as mental health and substance abuse services.

“I think we should bring as much hope as we can,” he said.

As the tribe becomes more successful, Allen said, it is able to give back to the community to both tribal and non-tribal citizens.

“This project is about getting people healthy,” he said. “One year from now, you’ll be seeing it opening up.” 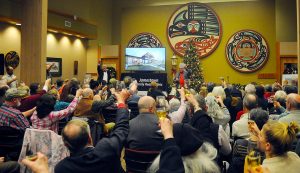