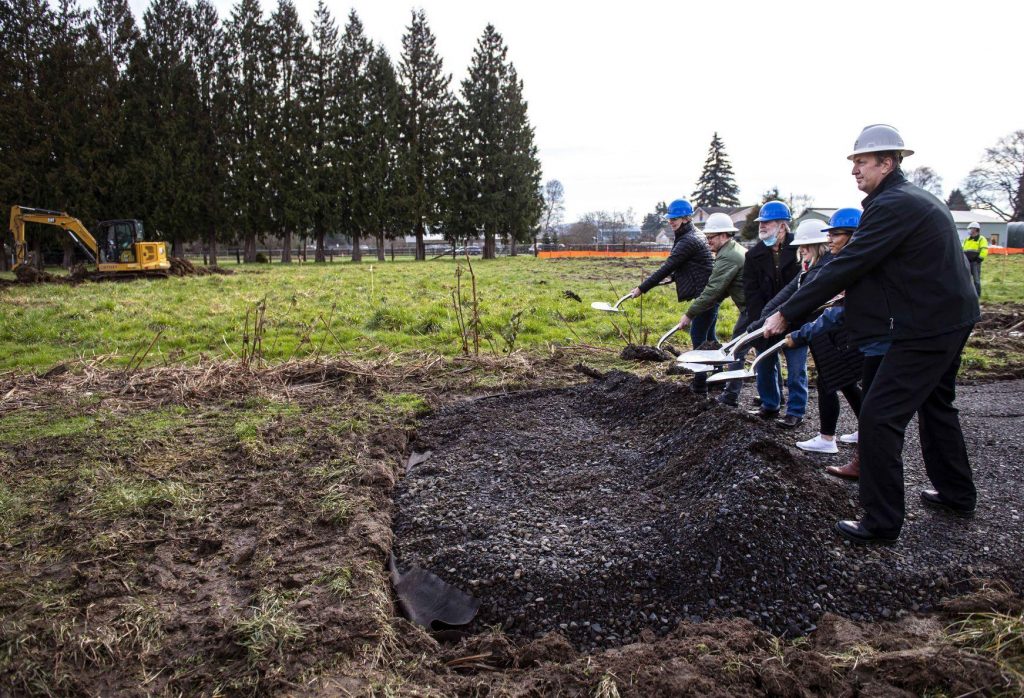 For nearly 28 years, Deanna Wells, the IT CAD vendor manager at the Cowlitz County 911 call center, has heard about the need to move from their current location — below the flood plain — in the Kelso Hall of Justice basement.

On Monday, March 1, construction broke ground for the long-awaited project at 2790 Ocean Beach Highway on the east side of Lowe’s.

“We’re excited,” said Wells. “We’ve dreamed of leaving the basement of the Hall of Justice for many years.”

The new, one-story location will nearly double the size of the 6,800 square foot basement the dispatch center had called home since the late ‘80s.

The flood-prone basement, said Wells, creates a hazard for the center’s “millions of dollars of equipment,” like computer, radio and telephone servers that the county relies on for emergency services.

Just last September, Wells said she had to mop water out of the basement. In the garage on the south side of the basement, she said there were several inches of standing water.

During the late ‘90s, she said dikes were built along the east side of the Hall of Justice to protect the dispatch center during a large flood.

In addition to potential water damage, Wells said the server room in the current location was not secured and did not include an air conditioning system until recently, leaving the emergency phone, radio and telephone lines vulnerable to tampering and overheating.

Any 911 call made in Cowlitz County is routed through the center. Wells said the center receives an average of 220 calls a day. Last year, the organization also began receiving emergency text messages and had a total of 177 in 2020.

Rachael Fair, the finance administrative specialist with the center, said the current location is at its max capacity with eight dispatch consoles, which include the computer systems dispatch staff use to monitor emergency calls and contact emergency services throughout the county.

The new location will start with eight consoles, with the ability to build up to 12 as additional staff are added. Wells said the new building will be designed to hold the center for the next 30 years.

Like most 911 dispatch centers, Wells said the Cowlitz County location is routinely understaffed because of the stressful nature of the job. It takes a year to train employees, who work 12-hour shifts, three days a week, and one four-hour shift.

“They are literally making life and death decisions hundreds of times a day,” said Wells. “That tends to weigh on people.”

The organization currently employs 18 full-time workers, while another three employees are in training and there are two open positions.

The center will include space to hold meetings and trainings, as well as if an incident such as a natural disaster requires the need for multiple agencies to convene in one location.

The new building will include about 10 parking spots for everyday use.

The center took out a 30-year, $15 million bond for the project, which includes $8.6 million for construction and more to furnish and establish the center’s network. Wells said she expects the project to total less than the bond.

In 2019, management for the center was transferred from the Cowlitz County Council and two additional county boards to a public authority. The center is funded the same way as before the management switch: by emergency agencies that use the center, 1/10 of 1% of a county sales tax, a grant from the state 911 office, and a portion of a state excise tax on cell phones, landlines and Voice over Internet Protocol systems.