As part of a process in which the City of Aberdeen is considering a number of different sites for a new history museum, a feasibility study for the Boeing Building was presented to the Board of Museum and History on Tuesday evening.
Principal Architect Mike Miller of Rice Fergus Miller in Bremerton made the presentation and said the building could be made suitable for housing museum exhibits and archives recovered after the Armory Building, which housed the Aberdeen Museum of History, was gutted by fire in June, 2018.

“This building needs a new life … it deserves a chance,” he said.

The museum board initially considered at least a half dozen potential locations to rebuild the museum and recommended that the city commission a feasibility study for the two-story Boeing Building, which is not far from F Street and the mouth of Wishkah and Chehalis rivers, in the shadow of the ramps to the Chehalis River Bridge.

The building was used by Boeing during World War II for the manufacture of B-17 gun turrets. It was built around 1915 and has been owned by the Goldberg family of Aberdeen since the 1930s.

Miller’s report to the board was based on a three- to four-hour site visit in October. The report wasn’t finalized and included no estimates for how much the project would cost. After the presentation, the board reached a consensus to move forward to the next step and have the architect produce a more detailed report, including cost estimates.

The feasibility study looked at the structural condition of the building, the current state of its electrical and mechanical systems, the suitability of the site and the use of the building as a museum.

The study identified problematic issues, including whether the location under the bridge on ramps in an undeveloped neighborhood was a good place to put a museum. The study questioned whether the site would convey a safe place for visitors if other development doesn’t occur in the neighborhood.

City planners have long wanted to develop the riverfront and that part of town, and some see the museum as a possible catalyst.
Another issue with the building was whether it could be structurally upgraded cost effectively. It’s unknown whether the building sits on wooden piles and what would have to be done to bring the building up to code structurally.

The architect’s feasibility study found that significant structural repairs would be required, including at least new concrete shear walls on the first level, new sheathing of the roof and second floor, repairs to cracks in concrete walls, removal or reinforcement of the unreinforced chimney, steel connection of roof and floor to concrete walls, repairs to rotted out areas in the roof and floors, supplemental floor framing for new museum loads in addition to confirming the pile foundation, its capacity and adequacy.

The study also indicated that existing systems for electricity, heat, water, sewer, gas and fire sprinklers would need to be replaced and the building would need to be insulated to meet new energy codes and to maintain humidity levels for it to be used as a museum. The site is not ADA accessible and would require sidewalks and wheelchair ramps.

When asked by the board if renovating the building would cost more than constructing a new building for the museum, Miller said he didn’t have a straightforward answer.

Besides cost and neighborhood concerns, the architect said the site could be hard for tourists to find and is also in a flood zone and close to railroad tracks. The study’s main positive about the site indicated that it has adequate parking for both cars and RVs in adjacent lots.
After the presentation, board chairman John Shaw led the board to meet the consensus to continue with the survey process and get a finalized report including cost estimates from the architect. Shaw also underlined the challenges the board is facing.

Newly seated Mayor Pete Schave was present for the meeting and acknowledged the tough position the board’s in.

“The trail that you’re on is uncharted, through no fault of your own,” he said.

Schave added that he’s not a museum expert, but was interested in exploring the possibility of using the Boeing Building as a storage facility for the museum’s archives. Archives recovered from the Armory Building have been in rented storage since the fire. 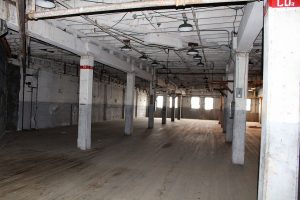